Armyworms are caterpillar pests of grass pastures and cereal crops.

They are the only caterpillars that growers are likely to encounter in cereal crops, although occasionally native budworm will also attack grain when underlying weed hosts dry out.

Armyworms mostly feed on leaves, but under certain circumstances will feed on the seed stem, resulting in head loss. The change in feeding habit is caused by depletion of green leaf material or crowding. In the unusual event of extreme food depletion and crowding, they will 'march' out of crops and pastures in search of food, which gives them the name 'armyworm'.

There are 3 common species of armyworm found in southern Australia:

Fall armyworm arrived in Queensland in February 2020 and has subsequently been found in the Northern Territory, Western Australia, New South Wales and, as of December 2020, in Victoria.  It is not yet known if the Fall armyworm will establish in Victoria as it prefers tropical and subtropical climates. More information on Fall armyworm.

Larvae (caterpillars) of the 3 species are similar in appearance. They: 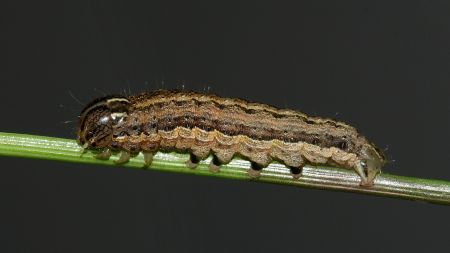 For an accurate identification, they must be reared through to the adult (moth) stage.

Moths are often seen flying on warm, humid nights. They are medium-sized, with a wingspan of 30mm to 40mm.

Each species has a characteristic colour and wing markings: Pupae of all 3 species are about 20mm long, shiny brown and are found under clods or within cracks in the soil.

Distinguishing armyworm larvae from other pests

Armyworms can be distinguished from other caterpillar pests that may be found in the same place by 3 pale stripes that run the length of the body. These stay constant no matter what variation in the colour of the body.

Other species of caterpillar that might be confused with armyworms include the following:

Armyworm eggs are laid in batches of about 5 to 30, glued together in the hidden, twisted crevices of dried grasses, straw and stubble or sometimes in seed heads.

The eggs can take 6 to 20 days to hatch, depending on local temperatures. The young larvae, which are about 2mm to 3mm in length, can be dispersed by wind a few metres away from the egg-laying sites on fine silken threads.

There are usually 6 stages (instars) of caterpillar growth, and the skin is shed after each. Older caterpillars crawl around at night and may move up and down plants regularly. They spend the day curled up at the base of the plant under clods of soil or in the plant crown. It is the older and larger larvae that cause all the damage to crops.

The larvae soon tunnel into the soil to pupate. The mature caterpillars pupate in the surface of the soil at the base of the plant. The adult moth finally emerges at least 4 to 6 weeks (possibly many more) after pupation, and migrates away from the region.

It's unusual for crops to be invaded 2 seasons in a row — a heavy infestation in 1 year rarely results in a further problem in the following season.

The common armyworm is the more usual pest in spring and early summer. This species appears to spend its winter in the warmer regions of northern Australia, and the subsequent generation of moths migrate south in early spring.

As crops and pastures start drying, the larvae are usually large enough to lop off tillers and stems bearing the seed heads — this accounts for most economic loss incurred by armyworms.

The moths that emerge from the spring generation migrate to other areas where green pastures or crops permit a new generation of egg-laying.

Southern and inland armyworm caterpillars can be found in autumn and winter, often in relatively high densities, throughout the grasslands and crops of south eastern Australia.

There are 2 generations per year. Most eggs are either laid in autumn, often immediately after rain, or in late winter.

The hatch of the autumn generation is synchronised with the emergence of autumn pastures and crops. The young caterpillars cause little damage while feeding on leaf surfaces, while the older larvae can defoliate the plant.

Moths of the southern and inland armyworm appear not to lay eggs after a spring emergence. There has been little research on the biology of these 2 species, but field observations suggest they have a winter habit, and that larvae do not usually survive the warmer temperatures of the late spring and summer periods.

The moths reappear in the autumn, particularly at about the time of the first autumn rains. It's at this stage that they start laying eggs in the dry grass and stubble from the previous pasture or cereal crop.

The young larvae feed initially from the leaf surface of pasture grasses and cereals. As the winter and spring progress and the larvae grow, they chew 'scallop' marks from the leaf edges. This becomes increasingly evident by mid to late winter.

By the end of winter or early spring, the larvae are reaching full growth and maximum food consumption. It's this stage that farmers most frequently notice as complete leaves and tillers may be consumed or removed from the plant.

The most damage is caused in ripening crops when the foliage dries off. The armyworms then begin to eat any green areas that remain.

In cereals, the last section of the stem to dry out is usually just below the seed head. Armyworms, particularly the older ones, that chew at this vulnerable spot cause lopping of the heads and can devastate a crop nearing maturity in 1 or 2 nights.

Generally, the larger the armyworm, the greater the damage. In wheat and barley, whole heads are severed, while in oats individual grains are bitten off below the glumes.

The crops affected include all Gramineae crops, including cereals, grassy pastures, corn and maize.

There are many factors that can lead to an outbreak, including:

The role of stubble retention

Winter outbreaks are most common in crops under conditions of stubble retention and minimum cultivation. This is because:

The direct and indirect benefits of these conservation tillage practices far outweigh their costs, including the occasional outbreak of armyworm.

Signs of the presence of armyworms include:

Early detection is essential, particularly when cereals and pasture seed or hay crops are at the late ripening stage.

Sampling can be achieved by:

The sweep-net or bucket method provides a rapid and approximate estimate of infestation size. The net or bucket should be swept across the crop in 180o arcs several times (preferably 100 times) at different sites within the crop to give an indication of density and spread.

Armyworms are most active at night, so sweeping will be most effective at dusk.

Average catches of more than 5 to 10 per 100 sweeps suggest that further searches on the ground are needed to determine approximate densities.

When ground sampling, it is necessary to do at least 10 'spot checks' in the crop, counting the number of caterpillars within a square metre.

Most farmers fail to detect armyworms until the larvae are almost fully grown and 10% to 20% damage may result. The earlier the detection, the less the damage. The young larvae (up to 8mm) cause very little damage, and are more difficult to find.

The critical time to look for armyworms is the last 3 to 4 weeks before harvest.

For information on currently registered or permitted chemicals, check the Australian Pesticide and Veterinary Medicine Authority (APVMA) website and always consult the label and Safety Data Sheet before using any chemical product.