If you think you’ve seen Phylloxera

If you think you have phylloxera, you must report any suspected detections to Agriculture Victoria within 7 days by:

There is a mandatory reporting requirement if a person knows or has reason to suspect phylloxera may be present at a property.

This mandatory requirement applies to person/s who:

A failure to notify is an offence under section 17 of the Plant Biosecurity Act 2010. The maximum penalty amount for sentencing by the Court is:

In the case of a notifiable pest or disease, 120 penalty units;

The current penalty unit amount is published on the Department of Justice and Community Safety website - Penalties and values. From 1 July 2022 to 30 June 2023, the value of the penalty unit is $184.92.

Phylloxera (Daktulosphaira vitifoliae) is a significant threat to grapevines in Australia and the insect can survive and develop on all Vitis species, including ornamental grapevines. Phylloxera is a small, yellow, aphid-like insect that feeds on the roots, and sometimes the leaves, of grapevines.  Adult phylloxera are 0.8 – 1.5 mm long and cream-yellow in colour. Read the Compliance and Movement Conditions page for more information on phylloxera zones in Victoria and legal requirements that apply.

Requirements for permits, certification and treatments apply to many movements on regulated phylloxera host materials, including equipment, bins, planting material and grapes.

What damage does phylloxera cause?

Phylloxera causes a progressive decline in vine vigour that spreads from the initial infestation site throughout the vineyard. Symptoms may appear within three years, with vine death possible within five to six years, depending on the phylloxera genotype and the vine cultivar. Grapevines grown on their own roots, Vitis vinifera, are most susceptible to phylloxera damage, as compared to grafted vines (rootstocks) that are known to have resistance or tolerance to phylloxera.

The insects feed by sucking fluids from the plant, causing galls to form on roots. The insects generally live and feed on the surface of root galls. By damaging the roots, the vines show symptoms of general decline, which include leaves transitioning from rich green, to pale green, to yellow as symptoms worsen. Secondary disease infections often occur in the damaged roots. In the early stages of an infestation leaf yellowing will normally be seen in two to three neighbouring vines.

Phylloxera can also feed on leaves, causing galls on the leaf, although this is less common in Australia. Leaf galling strains of phylloxera are known to occur in the North East Phylloxera Infested Zone.Plant shoots are smaller, with smaller canopy and with less length between leaves (internode distance).

What to look for in a vineyard?

Many canopy symptoms of vines infested with phylloxera can look like other concerns such as plant nutrition imbalances or deficiencies, changes in soil type, soil acidity, or soil moisture levels.  However, when vines appear weak but there is strong weed or grass growth at the base of the vines, it may be more likely to be phylloxera. General canopy symptoms can provide information on where to complete root inspections to look for root symptoms or the presence of phylloxera insects and eggs.

If you suspect phylloxera is present, you must notify Agriculture Victoria within 7 days by: 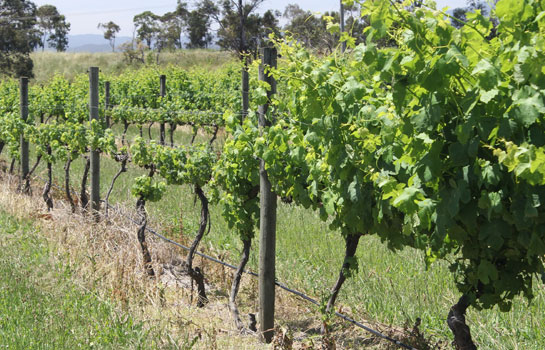 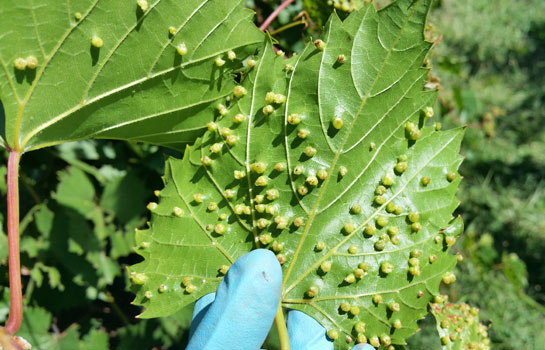 Specific underground signs of phylloxera to look for in a vineyard include: What time of year is phylloxera found?

During the phylloxera lifecycle, it moves below and above the ground. Eggs are laid on grapevine roots which hatch to “crawlers” as the soil temperature increases in spring. Cool weather will delay the emergence of crawlers.

If the crawler population on roots is too competitive, crawlers move above the soil into the canopy of the vines and spread out to find new feeding sites. There are overlapping generations of phylloxera during the growing season with populations at peak in late summer.

Adults can lay up to 200 eggs per cycle and are capable of several breeding cycles per season, depending on the virulence of the phylloxera strain, nutrition and environmental conditions.

How does phylloxera spread?

Movement of phylloxera is most often attributed to crawlers. These are easily picked up on clothing, footwear, equipment and vehicles, or in soil and vine material, and spread to other vineyards and regions. Crawlers can also naturally spread from vine to vine by crawling along the soil surface, in the canopy, or along the root below the soil surface. Phylloxera can survive for up to 29 days without a food source.

There are currently no known treatments for phylloxera. Instead, the current industry practice to manage phylloxera is by replanting a vineyard onto resistant or tolerant rootstocks.

If in doubt, or if you want to report another type of unusual plant pest or disease, use the details below.