It is a significant pest that causes production losses and can spread a serious plant disease known as 'zebra chip' in potato, caused by the Candidatus Liberibacter solanacearum (CLso) bacterium. CLso has not been detected in Australia.

TPP was first detected in Western Australia in February 2017. The origin of the incursion is unknown. There have been no confirmed reports of TPP in Victoria.

The psyllid is a tiny sap-sucking insect that go through three stages of development:

Adult TPP resemble small winged cicadas and are about 3mm long (Figs 1–3). The body is brownish and has white or yellowish markings on the thorax and a broad white band on the abdomen. Wings are transparent and held vertically over the body (Fig. 1).

Nymphs moult five times, getting progressively larger each time up to 2mm long. They are oval shaped, flattened and scale-like in appearance (Figs 1 & 2).

Psyllid eggs are less than 1mm long and are white when first laid, then turn yellow to orange after a few hours. The psyllid can spread through the movement of plants and plant materials including fruit, vegetables and nursery stock and on horticultural machinery and equipment. The psyllid can also fly short distances or be carried by wind. 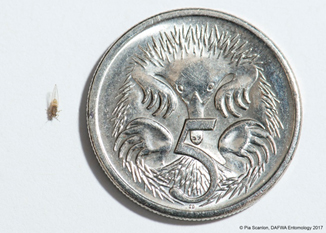 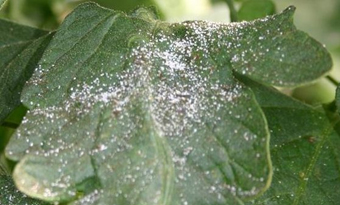 How commercial growers and residents can help

Commercial and residential growers of host crops are advised to regularly check their crops for signs of TPP, which can be found on the underside of leaves.

When present in a crop, noticeable signs of TPP include:

Growers are reminded that it is an offence under the Plant Biosecurity Act 2010 not to report a suspect case of tomato potato psyllid or bacterium.

To minimise the risk of tomato potato psyllid entering Victoria, restrictions apply to movement of host material (host plants, vegetables and fruits) sourced from any state or territory unless it meets market access requirements.

Advice on moving plant products can be found:

All figures courtesy of the Department of Primary Industries and Regional Development (DPIRD), Western Australia.