Balaustium mites, Balaustium medicagoense, have emerged as a significant pest in agricultural regions across areas of southern Australia that have a Mediterranean-type climate. They attack a variety of agriculturally important winter crops and pastures. They have a high natural tolerance to many insecticides and will generally survive applications aimed at other pest mites.

This mite is the only species of the genus Balaustium recorded in Australia and was likely introduced from South Africa, along with the redlegged earth mite, in the early 1900s. 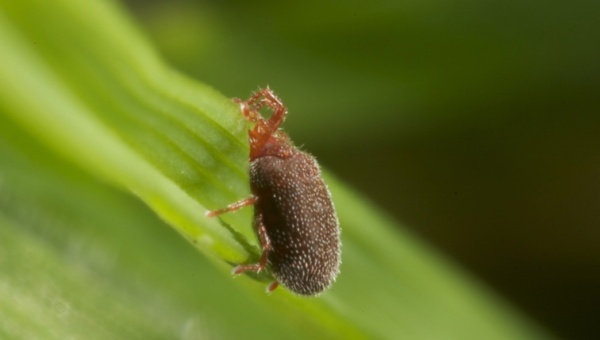 Balaustium mites are quite often confused with other pest mites, such as the redlegged earth mite, Bryobia mite and blue oat mites. However, they are the largest of the pest mites commonly found in broadacre crops and pastures.

Similar to other pest mites, Balaustium mites have a rounded dark red-brown coloured body and eight red-orange legs. They have distinct short stout hairs that cover their entire body, which gives them a velvety appearance (Figure 1). They have distinct 'pad-like' structures on their front legs and are slow moving.

Adults reach about 2mm in size, which is twice the size of other pest mite species. This feature can help distinguish them from other mites commonly found in crops and pastures.

In the Balaustium mite's earlier stages:

Balaustium mites are widespread across agricultural regions in southern Australia with a Mediterranean-type climate. They are generally restricted to coastal areas and do not occur too far inland or in the drier Mallee areas of Victoria and South Australia. They are found in Victoria, New South Wales, South Australia and Western Australia (Figure 2). They have been found in Tasmania, but there has been no systematic sampling conducted and the distribution across the state remains unknown. Balaustium mites are active in the cool, wet part of the year. Mites generally emerge in March and can be found until December. Numbers peak in autumn and spring which is when they are most active. They go through at least two generations per season; one in autumn/early winter and the other in late winter/spring.

Balaustium mites are thought to enter summer diapause at the egg stage in December and become active again in late summer or early autumn when eggs hatch as soon as there is sufficient moisture. Development from larvae to adult takes approximately 5 to 6 weeks, with adults having been found to live for at least 8 weeks in field enclosures. Eggs are likely to be laid in batches of up to 30.

Recent molecular studies have shown that Balaustium mites reproduce asexually, with populations dominated by a limited number of genetic or 'clonal' variants. Males have been found but are rare and likely non-functional.

Balaustium mites are most active in the warmer parts of the day, where they can be found on the foliage, particularly near the tips of plants. They tend to feed singularly.

They attack a variety of agriculturally important plants, but canola, lupins, barley, wheat, oats and lucerne are most susceptible, particularly at seedling emergence. They and are also commonly found on grasses (e.g. barley grass) and weeds (e.g. capeweed).

Balaustium mites are unusual in that they not only feed on plants, but also prey upon other small invertebrates. They have been reported to feed on a number of different groups, including various collembolan species and other mites. Balaustium mites were originally thought to be a beneficial predator with some reports suggesting they provided localised control of redlegged earth mites. It is only in the last 25 years that Balaustium mites have been confirmed to feed on living plant material.

Balaustium mites feed on plants using their adapted mouthparts to probe the leaf tissue of plants and suck up sap. In most situations they cause little damage, but when numbers are high and plants are stressed due to other environmental conditions, they can cause significant damage to crops. Seedlings or plants can wilt and die under high infestations. Balaustium mites typically attack the leaf edges and leaf tips of plants.

In canola, damage is characterised by distorted and cupped cotyledons, which may have a leathery appearance (Figure 3). In cereals, grasses and pulses, Balaustium mites cause irregular white spotting or bleaching of the leaves (Figure 4). The impact of mite damage is increased when plants are under stress from adverse conditions, such as prolonged dry weather or waterlogged soils. Ideal conditions for seedling growth enable plants to tolerate higher numbers of Balaustium mites.

Inspect susceptible pastures and crops from autumn to spring for the presence of mites and evidence of damage. It is especially important to inspect crops regularly in the first 3 to 5 weeks after emergence when seedlings are most susceptible to feeding damage from Balaustium mites.

Crops sown into paddocks that were pasture the previous year should be regularly inspected for Balaustium mites. Weeds present in paddocks before cropping should also be checked. Mites are best detected feeding on the leaves, especially on or near the tips, during the warmest part of the day. Balaustium mites are difficult to find when conditions are cold or wet.

One of the most effective methods to sample mites is using a standard petrol-powered garden blower/vacuum machine. Place a fine sieve or stocking over the end of the suction pipe to trap any mites vacuumed from plants and the soil surface. Place the contents onto a black tray, as this allows any mites that are present to be easily identified.

This species has a high natural tolerance to many insecticides and will generally survive applications aimed at other mite pests. Pyrinex® Super is the only insecticide registered to control Balaustium mites in Australian broadacre crops and is currently only registered against this species in canola.

For information on currently registered and or permitted chemicals, check the Australian Pesticide and Veterinary Medicine Authority (APVMA) website. Always consult the label and Safety Data Sheet before using any chemical product.

There are no biological control agents (predators or parasites) identified in Australia that are effective in controlling Balaustium mites. Alternative methods such as cultural control can prove to be effective at controlling this mite.

These cultural control methods include:

This information note was originally developed by Aston Arthur and Paul Umina from Cesar Australia and reviewed by both authors in 2021.