It is very resilient and can survive in stored food, packaging and transport facilities in very low numbers under difficult conditions.

Khapra beetle is currently absent from Australia and would severely impact our international trade if it became established here.

How to identify khapra beetle 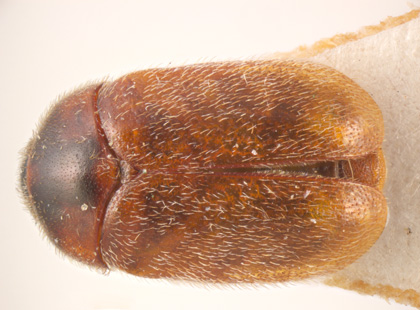 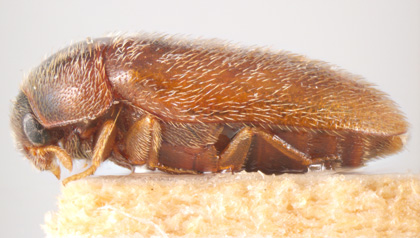 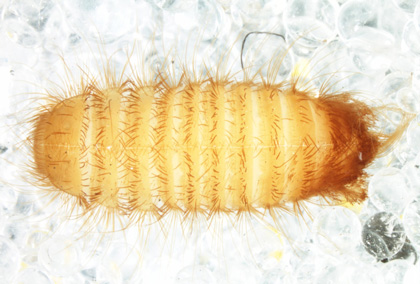 Khapra beetle may be confused with other Trogoderma species in Australia (e.g. warehouse beetle). Expert diagnostics is required to identify khapra beetle.

Adult male and female beetles mate immediately after emergence. Adult females begin laying eggs shortly after mating, in or near host material and generally lay 50 to 100 eggs during their lifetime. Adult beetles live between 12 and 25 days and cannot fly. Adults are not commonly encountered because their offspring eat their bodies for protein.

Eggs hatch within 5 to 7 days into larvae. This is the major feeding stage and therefore the most damaging. Larvae moult four or more times, resulting in numerous cast larval skins. The larval development stage may be as short as 30 days. However, larvae can survive in a dormant state for many years in unfavourable conditions.

Khapra beetle is a pest of stored foods and can feed on most dried plant or animal material. Their food preference is grain and cereal products, including wheat, barley, oats, rye, maize, rice, flour, malt and noodles.

It also feeds on:

Other commodities that often serve as hosts include:

Khapra beetle is native to India but has spread and can be found in Middle East, Asia, Africa and Europe.

It is spread through the movement of infested stored grain and dried food products (for example flour, breakfast cereals, pasta, coriander seed), or contaminated seed, machinery and packaging. The beetle can also hitchhike in shipping containers, packaging or other household furnishings imported from countries where khapra beetle is found.

Khapra beetle is listed as number two on Australia’s National Priority Plant Pests list and if it becomes established, could have a devastating impact on Victoria’s grain, dried fruit and nut industries through lost trade.

Khapra beetle can cause up to 75 per cent grain loss due to direct feeding and also causes contamination of stored grain with cast skins and beetles, that can pose a health risk.

Due to its ability to survive without food for years and limited effective treatment options for larvae, management is extremely challenging once established.

Where to look for khapra beetle

Khapra beetles and larvae are tiny and generally hard to see. Look for khapra beetles in the corners and bottom of bags containing grain or cereal products (for example flour, pasta, rice, oats, coriander seeds) and also check cracks and crevices of your pantry.

On receipt of imported products from countries where khapra beetle is established, check:

If you suspect you may have found khapra beetle:

Report the detection immediately to the Department of Agriculture, Fisheries and Forestry.

If you think you have found khapra beetle, catch it in a container and report it immediately to the Exotic Plant Pest Hotline.

Videos from the Department of Agriculture, Fisheries and Forestry