Codling moth, Cydia pomonella (L.), is the principal insect pest of pome fruit in Victoria. The larvae (caterpillars) need to feed on fruit to survive to maturity. They are highly dependent on fruits as a food source and thus have a significant impact on crops. If not controlled almost the entire crop can be affected.

Control of codling moth is the key to almost all other pest programs in pome fruit orchards. Some of the chemicals registered to control codling moth have adverse effects on beneficial insect species, which contribute to biological control of other pests. Use of such disruptive chemicals often results in the need to apply more pesticides for control of minor pests.

The adult codling moth has a wingspan of about 12 to 18mm and is about 10mm long when at rest with the wings folded. Females (Figure 1) are larger than males (Figure 2). The forewings are brownish grey with several grey crosslines. An iridescent coppery-brown spot is present near the tip of each forewing. The hind wings are pale brownish grey with fringed borders. At rest the codling moth has its wings folded behind its back (Figure 3). 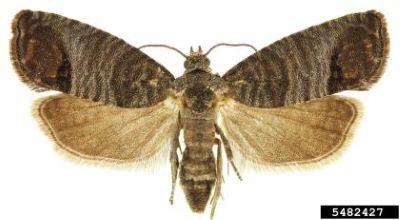 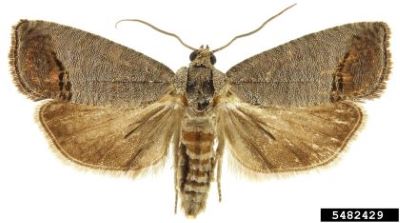 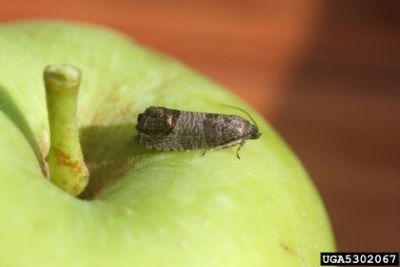 The female moth lays eggs singly on leaves and fruit. The egg is flat, oval, 1mm long, opaquely white when first laid developing a red ring towards maturity. Just before hatching the black head of the larva becomes visible in the egg (Figure 4). A newly hatched larva is white with a black head. There are generally five larval stages, which can be identified by the width of the head. Average widths of larval head for the five stages are approximately 0.3, 0.5, 0.8, 1.2 and 1.7mm respectively.

Fully mature larvae are about 15mm long and creamy pink with a dark brown head. They leave the fruit and form cocoons under loose bark on the tree or amongst leaf litter on the ground beneath the tree.

Over-wintering larvae start to pupate early in spring as temperatures increase around the time of bloom. The moths emerge usually in one or more periods of peak activity, each period referred to as a 'flight'. A second cohort of the over-wintered population pupates later when the daylength increases to around 14 hours. Up to three generations per season may occur in Victoria, depending on prevailing weather conditions.

Young larvae chew through the fruit skin and excavate a cavity where they moult before starting to bore their way to the core to feed on seeds (Figure 5). The presence of one or more holes in fruit plugged with frass (excrement) is characteristic of attack by codling moth (Figure 6). The larvae enter the fruit through the sides, stem or calyx end and a syrupy substance may exude from the holes as the fruit matures. Similar damage can be caused by Oriental Fruit Moth, but this species does not generally feed on seeds. 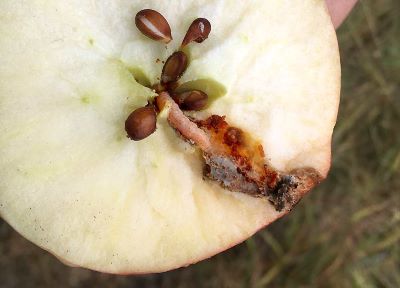 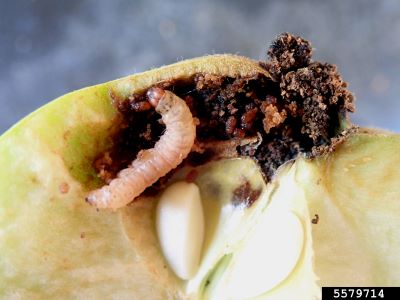 Shallow entries called 'stings' result when larvae die, often from insecticide poisoning, while excavating the cavity below the skin (Figure 7). 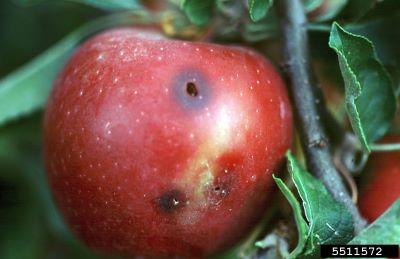 Adult female codling moths release a sex-attractant chemical (pheromone) to attract male codling moths. Synthetic pheromones are used in traps to indicate the presence of male codling moths in orchards. Pheromone trap catches and temperature records can be used to predict when the eggs resulting from a particular moth flight will be hatching. Such predictions allow better timing of spraying. Traps containing a combination of pheromone and host plant volatiles are also available and attract both sexes, which is useful for monitoring moth activity when mating disruption products are in use.

Mating disruption is a technique in which the orchard air is saturated with pheromone emitted from slow-release dispensers. This upsets moth communication, making it difficult for male moths to locate females. Mating disruption products are available commercially for large-scale orchards and, although not entirely eliminating mating, are able to delay it and reduce the number of eggs being laid.

Codling moth eggs are preyed on by earwigs and mirid bugs but neither gives significant control. Wasps such as Trichogramma parasitise codling moth eggs and have been used with some success in Russia. Under Australian conditions, the rate of parasitism is too low for commercial use as a stand-alone treatment but research is underway to integrate egg parasitism with other biological control options.

A parasitoid wasp, Mastrus ridens, that attacks codling moth larvae in their cocoons has been introduced and released into commercial orchards with promising results. This wasp is particularly effective at reducing overwintering populations of cocooned larvae. Also available commercially is a parasitic nematode that has similarly shown promise for control of over-wintering larvae.

Stressed codling moth larvae are susceptible to infection by a commercially available virus. Timing of application is critical because the larvae have to ingest the virus and the only time they can be exposed is when they hatch from the egg and walk across a treated leaf or fruit surface on their way to a feeding site. It usually takes several seasons of persistent use, often in combination with other treatments, to bring the codling moth population levels down.

Chemical control is often used on plant pests as part of an Integrated Pest Management (IPM) program. Your local nursery, cropping consultant, chemical reseller or pesticide manufacturer will be able to advise you on the insecticide most suitable to your conditions. For information on currently registered and permitted chemicals, check the Australian Pesticide and Veterinary Medicine Authority (APVMA) website. Always consult the label and Safety Data Sheet before using any chemical product.