The brown marmorated stink bug (Halyomorpha halys) (BMSB) is an exotic plant pest that is a high priority for Australian biosecurity (Figure 1).

This economically damaging pest can attack over 300 types of fruit, ornamental trees and vegetable crops and would be a nuisance for households if it established. 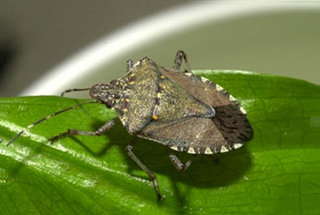 BMSB risk season is the high-risk period from September to April each year.

Surveillance is conducted during BMSB risk season with traps set up at high-risk locations in Melbourne. Surveillance is also heightened on selected imports shipped to Australia.

If you think you have found this pest (or any other unusual insect), catch it in a container and call the Exotic Plant Pest Hotline on 1800 084 881.

Email photos of the suspected pest and damage, along with your contact details and the pest's location using our online form.

Where BMSB is from

This pest is highly invasive and is native to:

It has since spread to the United States and Europe, which puts more pressure on our borders than ever before.

While BMSB is not established in Australia, this pest tries to pass our borders by hiding inside imported shipping containers, machinery, goods and packaging — especially in the 'brown marmorated stink bug risk season' from September to April.

In the summer of 2018 to 2019, the BMSB hitchhiked on imported goods and was found in Victoria for the first time in:

We responded to the detections by conducting surveillance to search for this nuisance pest, with the aim of preventing further spread and not allowing it to establish in Victoria.

While our surveillance activities indicated that there were none remaining in these areas, we need your help to ensure that none took shelter during winter.

Keep a look out for any that may have come out of their hiding spots.

So, I'm a biosecurity officer. I work for Agriculture Victoria. Basically, we're doing some surveillance in response to a detection of brown marmorated stink bug that was initially detected in southeast Melbourne.

We've set up a trapping grid in the area really just to determine if there are any stink bug here and, if so, stop them getting any further.

It's a small bug, between 1 and 2 centimetres long. It emits an odor. They're generally a mottled brown colour with a reddish tinge on their belly but they can vary a little bit. And along the edges of the abdomen they have a black and white stripe or banding.

During the warmer times of the year, the pest directly affects over 300 different host species feeding on the fruit. And during cold months it retreats indoors where it's nice and warm inside sheds and homes.

Well, it's incredibly important for the horticultural industry. If this pest would have become established it could have a significant impact on horticulture.

So we've just got the trap here. We're just going to have a little bit of a look in there and see if we've caught any stink bug in the bottom part here.

OK, so there's nothing in there that's too interesting.

The one other spot that the bugs could be located is in amongst these leaves. It's a bit hard to see them with our eyes so we use a method called beat-netting where we place the leaves in the net and shake them so the bug falls off into the net. We check and it's empty.

And we've got sticky traps set up as well with a pheromone in here to attract the bugs to aggregate.

We've had a few insects appear on a sticky trap overnight. I don't suspect any of these are brown marmorated stink bug but just to be safe I'm going to send them off for confirmation.

The members of the public are strongly encouraged to examine their property, search sheds and other areas the bugs could be hiding. A really common spot is on fruit trees so that's a high-priority inspection spot.

If you suspect a brown marmorated stink bug, chuck it in a container and call the exotic pest hotline and they'll direct you through the process.

Damage to crops and gardens

It is known to feed on and damage over 300 types of fruit, ornamental trees and vegetable crops, including:

If it did become established in Victoria, producers and gardeners would face significant crop losses and higher production costs.

Risk to homes and buildings

BMSB poses no risk to human health. It is a nuisance pest because it can enter homes, vehicles, machinery and sheds to seek shelter during cooler months — often in very large numbers.

They are not easy to treat with insecticides and produce a very unpleasant odour when disturbed or squashed, making them hard to remove. 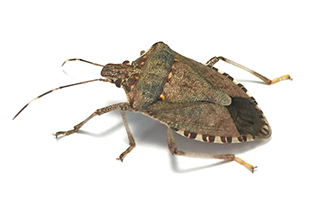 Newly hatched nymphs have a: Help keep it out of Victoria

Check your luggage and packages when returning to Victoria from Asia, North America, Chile, or Europe to ensure you have not brought any pests, including the BMSB, with you.

If you receive goods directly from overseas (including online shopping parcels), look out for BMSB and other pests that may have stowed away in goods or packaging.