Green snail (Cantareus apertus) is a declared exotic pest in Victoria and is a notifiable pest under Section 17 of the Plant Biosecurity Act 2010.

If you know or have reason to suspect that green snail is present on any property in Victoria, you must notify Agriculture Victoria by calling 136 186 or emailing Market.Access@agriculture.vic.gov.au.

Notifications must be made within seven days of becoming aware or suspecting the presence of green snail.

The life cycle of the snail is heavily influenced by day length and moisture conditions as these determine length of aestivation (dormancy). Generally, after autumn and winter rains, dormant snails reactivate and emerge from the soil. The mature snails then lay eggs in the soil around May or June, and young snails begin to appear in early winter. In spring to early summer, the snails burrow into the soil, seal the opening to their shell with a solid skin and become dormant.

Green snail is a helicid snail that has a globular, thin and translucent shell of 3 to 4 whorls. It has an approximate height of 27 mm and width of 27 mm. The colour of the snail is generally pale, but it can often become dark green with maturity. Juvenile snails have an olive-green shell while mature snails have an olive-brown shell.

The damage caused by the snail includes a 'windowpane' effect on young leaves as well as holes in leaves resulting from feeding. 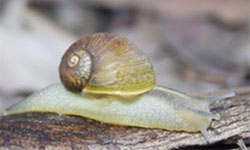 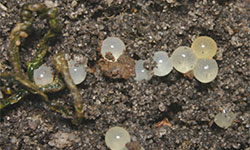 Green snail has been established in the Perth metropolitan area since the 1980s. It was first detected in Victoria in 2011 near Cobram in the northern region of the state. There have not been any detections outside this region since.

Green snail can spread slowly via natural movement. However, they are primarily spread through the movement of plants, soil and other objects.

To minimise the risk of introducing green snail to your property, ensure all machinery, equipment and bins are appropriately cleaned before arriving on your property. Inspect all plant materials that arrive for evidence of the presence of green snail.

Businesses that are operating land where green snail has been detected, or land that has been linked to a green snail detection, must also follow biosecurity measures to reduce the likelihood of the pest spreading further.

All owners/operators of green snail affected land require a permit to move any potential green snail carriers off their land (including plants, machinery and equipment). If you require a permit, please contact Plant Standards on 136 186 or plant.standards@agriculture.vic.gov.au.

Interstate trade regulations exist to prevent the spread of green snail into other states and territories. Contact the relevant state authority for more information regarding interstate entry requirements and market access.

Agriculture Victoria is currently undertaking a review of green snail management and legislation in Victoria.

The aims are to:

While the review is ongoing, the regulatory measures currently in place for green snail will remain the same. The findings will be communicated to stakeholders once the review has been completed.