Silverleaf white fly (SLW) is a small sap sucking pest like aphids or leafhoppers. Biotype B refers to a type or strain of the species that can transmit plant viruses through feeding activities.

Biotype B was first reported in Australia in 1994. The preferred scientific name for this species is Bemisia tabaci MEAM1 (Middle East-Asia Minor 1) but it is still widely called biotype B. In the USA this species is often referred to as Bemisia argentifolii and more commonly known as sweet potato whitefly.

There are three biotypes present in Australia which are indistinguishable in the field but can be identified through molecular analysis.

Why is SLW Biotype B a pest?

SLW Biotype B feeds on over 600 plant species including vegetable, field, ornamental and weed species. Of note are:

It is difficult to control due to its ability move from one host plant to another and to quickly develop resistance to insecticides. Further, it has a high reproduction rate and a short generation time. Under the right conditions there can be up to 12 overlapping generations a year with very high populations able to develop within the course of 3–4 weeks.

SLW is worldwide pest. In Australia SLW Biotype B is present in Queensland, Northern Territory, New South Wales and Western Australia and has been reported from glasshouses in South Australia, Victoria and Tasmania.

Status of SLW Biotype B in Victoria

SLW Biotype B was first detected in Victoria in 2003 in Murchison, a small town located 160 km north of Melbourne. In 2018 more specimens were found in the nearby towns of Shepparton and Gillieston. Since December 2020 SLW Biotype B has been was detected from Warragul and Yarragon in Baw Baw Shire and Katunga in the Goulburn Valley. Following these latter detections SLW Biotype B is now considered to be established in the state. Producers of affected crops should be aware of the symptoms associated with feeding damage caused by this pest and any requirements imposed on the movement of host material mandated by an interstate biosecurity agency.

Eggs (Figure 1) are oblong with a pointed end that is attached to the underside of the leaf surface. They are not visible with the naked eye at 0.2 mm long. Each female randomly lays between 50–400 eggs (average 160), in circular groups on the underside of leaves. Crawlers or first instars (Figure 2) are greenish-yellow, flattened, oval shaped and about 0.3 mm long. They crawl a short distance until they tap into a sap source in the phloem tissue and remain there until adulthood. 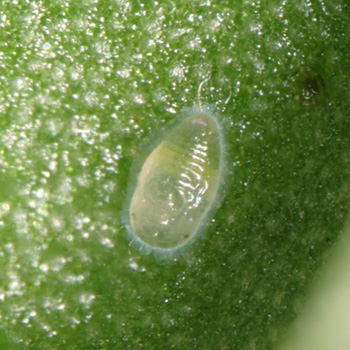 Second and third instar nymphs (Figure 3) lose their legs after the first moult and are stationary from this point on until adulthood. During this stage they look like soft scale insects, oval but slightly pointed towards the tail, and spend their time feeding by sucking sap from the plant. 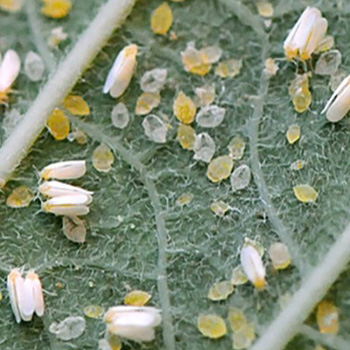 Fourth instar or red-eye pupae (Figure 4) are dark yellow and between 0.6–0.8 mm long. They develop obvious red eye spots. Late in the fourth instar they stop feeding and the adult emerges by rupturing the skin case. The empty white cases the adults emerged from can be seen under the leaf. 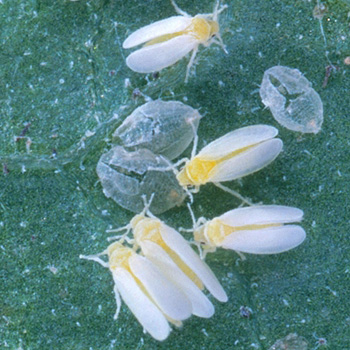 The complete life cycle of SLW Biotype B can take 18–28 days in warm weather (Figure 6). While feeding, toxic saliva is injected into the plant which can cause physiological changes to plant tissue. Silvering of leaves and is a common symptom on pumpkin (Figure 8), zucchini and squash. Fruit discolouration occurs in cucurbits and beans. Pale stalks or ‘white streaking’ disorder can occur on broccoli (Figure 9). In the process of feeding both adults and nymphs excrete honeydew. This sugary substance can promote the growth of sooty moulds that affect marketability of any produce. Sooty mould also reduces plant photosynthesis and the effectiveness of insecticides (Figure 10). Infection with TYLCV can result in stunted or dwarfed plants, yellowing (chlorosis) of leaves between the veins, leaves which are small with edges that curl upwards and inwards, absence of fruit production or fruit produced that is small, dry and unsaleable and flowers that do not fully develop or fall off (Figure 11).

In tomato plants that are infected early, they can be severely stunted and do not produce fruit. When older plants are infected, fruit that is already forming ripens normally, but no new fruit is formed after the infection. In infected beans, leaves thicken and curl upwards, and abnormal side shoots form. Infection with TYLCV has been known to cause up to 99% percent losses in tomatoes. Infestations of whiteflies, especially in greenhouses may occasionally be a mixture of SLW andthe greenhouse whitefly (GHW) (Trialeurodes vaporariorum). The adults can be distinguished by eye based on wing positioning. SLW hold their wings vertically tilted in a tent-like configuration (Fig 12a), whereas the wings of GHW are flattened and overlapping (Figure 12b). Controlling SLW populations before they reach large numbers in crops is very important for successful management. Adults will move between successive crops, so management approaches must be employed for all crops within the area.

Seedlings can spread whiteflies and leaf curl viruses into new plantings. Young plants are more susceptible to damage from SLW, so early infestations need to be avoided. Growers should check their suppliers to determine what measures are being used to protect against whitefly infestation. Inspect plants carefully upon arrival for whitefly eggs, nymphs and adults.

The availability of a continuous source of hosts, whether they are crops, weeds or garden plants, is the major contributing factor to a severe whitefly problem. Minimising whitefly hosts reduces the base population at the start of the cropping season. A smaller base population then will delay the time it takes for SLW numbers to reach significant levels.

Movement of adults from older crops and crop residues is the main source of infestation for younger crops. Post-harvest destruction of heavily infested crops often causes mass migration of SLW adults into adjacent crops. It is therefore important to control adult whiteflies before they move into young crops.

For moderate whitefly infestations, use an insecticide or oil treatment effective against adults. Plough in the crop within three days to kill all remaining nymphs on the crop foliage.

Remember that withholding periods still apply and that produce should not be taken from the fields for consumption. Don't feed crop residues to livestock.

Selecting the correct insecticide and applying them at the appropriate time is important, both for achieving good SLW management and minimising the development of insecticide resistance.