Bumblebees are not native to Australia, though the large earth bumblebee Bombus terrestris has established in Tasmania. Though there have been occasional reports of bumblebees in Victoria, only one report has been confirmed. A single dead bee was detected in inner Melbourne in March 2020, however, follow up surveillance has found no additional suspect bumblebees.

If you think you've seen bumblebees in Victoria

If you think you've seen bumblebees in Victoria, contact our Customer Service Centre on 136 186.

If, from your description, bumblebees are suspected, a technical specialist might contact you to arrange a visit to the location where the sighting occurred.

If you've collected an insect and think it's a bumblebee

Warning: Bumblebees can sting multiple times. Do not handle live bees. Only collect bumblebees if you are competent in the collection of stinging insects and it is safe to do so.

If you suspect an insect you've collected is a bumblebee, please submit the insect for examination:

Appearance of a bumblebee

Although many native bees (Figures 6 and 7) occur in Australia, none resemble bumblebees. The large earth bumblebee (Figures 1 to 3) is hairier, and more heavily built, than the European honeybee (Figure 4) or the European wasp (Figure 5). 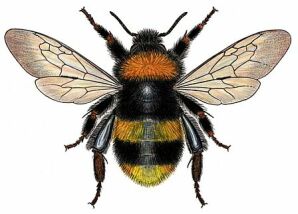 European wasps are bright yellow and black, and less hairy than bumblebees or honeybees.

Large earth bumblebee queens (Figure 1) are 30mm to 35mm in length. They make a loud buzzing sound during flight.

Workers (Figure 3) are highly variable in size, ranging from 8mm to 22mm in length. Large earth bumblebee males (Figure 2) are similar in size and appearance to large workers.

In comparison, European honeybee Apis mellifera workers are approximately 15mm long and are dark yellow-orange and black. European wasp Vespula germanica workers average around 15mm long, and European wasp queens can be up to 20mm long.

The large earth bumblebee is used commercially overseas to pollinate certain glasshouse and field crops. But in Victoria bumblebees could pose a potential threat to the environment and primary production.

Under the Flora and Fauna Guarantee Act 1988, the introduction and spread of the large earth bumblebee to Victoria has been listed as a 'potentially threatening process'. Potential impacts include:

Bumblebees can also sting multiple times, although they will generally only do so when physically threatened.

Investigating the impact of bumblebees

Studies are underway in Tasmania to assess the impact of bumblebees on:

These studies are also investigating the distribution and spread of the large earth bumblebee in Tasmania, and whether pests or pathogens of the bumblebee are present.

In Victoria, we have prepared a Pre-incursion Plan that describes the threat and states what will be done to manage the threat. Some actions are already underway including development of a Surveillance Plan and routine trapping at key locations trialling a lure previously unused in Victoria.

Bumblebees cannot be imported to Australia from other countries. Visit the Department of Agriculture website for information on importing animals to Australia.

Introducing the large earth bumblebee to Victoria from Tasmania may be a breach of the Livestock Disease Control Regulations 2017. Contact our Animal Health Branch on (03) 5430 4509 for advice.