If you know or have reason to suspect that Potato Cyst Nematode (PCN) is present on any property in Victoria, you must notify Agriculture Victoria by calling  136 186 or email Market.Access@agriculture.vic.gov.au.

Notifications must be made within 7 days of becoming aware or suspecting the presence of PCN.

Globodera rostochiensis or Potato Cyst Nematodes (PCN) are microscopic, worm-like organisms that are less than 1mm in length. PCN primarily feed on the roots of potatoes, tomatoes, and other plants of the Solanaceae family.

They are one of the most serious threats to potato production worldwide and can cause devastating yield loss in susceptible crops. Damage associated with the presence of a PCN infestation varies from small patches of stunted plants (commonly referred to as a 'lens'), to complete crop failure (figure 1). 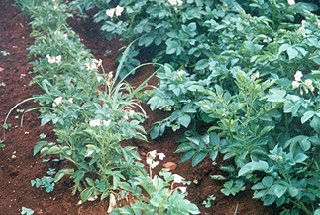 Eggs are contained within a cyst (figure 2), which are the expanded dead bodies of female nematodes. After the eggs hatch, the juveniles leave the cyst and invade the roots of susceptible host plants. After reaching maturity, 200 to 600 eggs (figure 3) develop within mated females, which in turn form new cysts as the female dies.

Cysts that contain viable eggs remain dormant in the soil until the next potato (or other Solanaceous host) crop is planted. Dormant cysts are reported to survive in soil for up to 20 years. G. rostochiensis was previously detected in Western Australia but has since been eradicated from the state.

The following symptoms can indicate the presence of PCN: 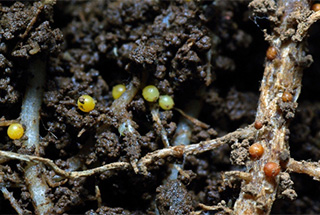 PCN primarily spread via the transfer of infested soil that is adhered to plants and other objects.

Minimising the risk of PCN

To minimise the risk of introducing PCN to your property, ensure all machinery, equipment, and bins arrive on your property cleaned free of visible soil. Planting PCN tested seed potatoes will also reduce the risk of PCN being introduced.

To prevent the increase of PCN populations on your property, ensure resistant crops are planted and other management methods such as longer crop rotations, chemical control, and effective surveillance are utilised.

In Victoria, PCN is known to occur in the following districts:

Legislation is enacted under the Plant Biosecurity Act 2010 declaring all PCN-affected parcels of land in these districts to be Control Areas for the purpose of preventing the spread of PCN.

All owners and operators of PCN-affected land require a permit to move PCN hosts from their land. If you require a permit, please contact Plant Standards at 136 186 or plant.standards@agriculture.vic.gov.au.

The role of government and industry in PCN management in Victoria is also outlined in the PCN Management Policy for Victoria.

Interstate trade regulations exist to prevent the spread of PCN into other states and territories. Contact the relevant state authority for more information regarding interstate requirements for PCN hosts.