Two-spotted mites, also known as two-spotted spider mites (Tetranychus urticae) are found worldwide including throughout Australia. They have an extremely wide host range and are readily spread by wind.

High population densities can cause severe crop damage and reductions in yield.

Under optimum conditions the life cycle of the two-spotted mite may be as short at 2 weeks and all stages may be found at the one time (Figure 1). 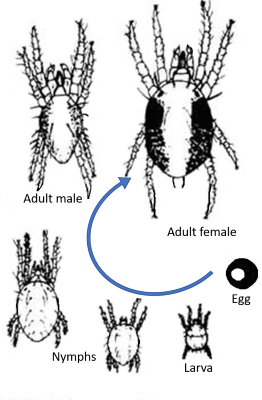 The egg of the two-spotted mite is minute (about 0.14mm), globular and transparent when laid, becoming pale yellowish-white and opaque later. Depending on the prevailing conditions (temperature, crop, humidity) a female can lay up to 6 eggs a day and usually lays a total of 70 or more in her lifetime. Hatching occurs 3 to 10 days later, depending on the temperature. Only males are produced from unfertilized eggs whereas both males and females can develop from fertilsed eggs.

The larva that hatches from the egg has 6 legs, is pale yellowish-white, minute and oval. After eating they change colour to yellow or green and 2 dark spots appear on the body. Following another period of feeding, the larva develops into an 8-legged nymph (first nymphal stage), then the cycle of feeding and moulting is repeated resulting in the second nymphal stage and then an adult. The young mites mature in 4 to 12 days, depending on temperature, and may live for another 3 weeks or more.

The adult female is about 0.5mm long, oval-shaped and rounded at the rear. The colour can vary from orange, light and dark green, reddish brown and black and is often dependent on the food crops (Figure 2). 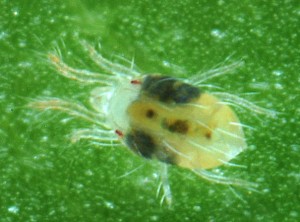 The adult male is smaller, about 0.3mm long, and more pointed at the rear (Figure 3). His colour varies from light yellow and orange to dark yellow and brown. In the summer adult females are a yellowish-green, with 2 pronounced dark spots, one on either side of the body. In males these spots are less conspicuous. Both sexes possess 2 reddish eyespots. The mites generally congregate on the underside of leaves.

Only adult females overwinter. The development of the overwintering or hibernating form is initiated by shortened daylength, decreased temperatures and unfavourable food supply. Overwintering females stop feeding and egg-laying, become orange-red and move to shelters on the ground and in cracks in the bark of lower regions of trees.

Overwintering is terminated by the increased temperatures in spring. The mites leave their overwintering sites and lose their reddish colour as they start to feed. Mites living in protected environments, such as glasshouses, do not hibernate over winter but continue to feed and reproduce.

Nymphs and adults damage plant foliage by piercing the cells and sucking the contents, causing chlorotic spots that give the leaf a stippled appearance (Figure 4). 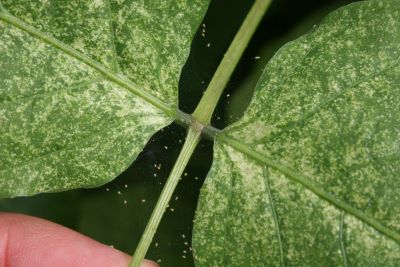 Heavily infested leaves can turn yellow or bronzed and shriveled decreasing the surface area for photosynthesis and leading to tree decline. Two-spotted mite is also a profuse web-spinner in its active stages. The webbing helps to protect the mites from pesticides and some predators (Figure 5). 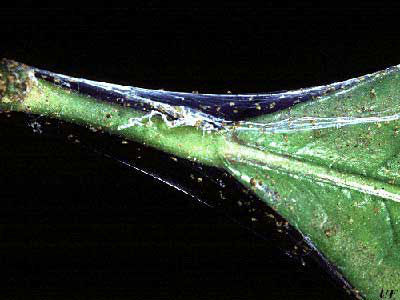 Pear trees are particularly sensitive to mite damage and cultivars such as Williams Bon Chretien (WBC, Williams, or Bartlett) develop dry brown areas on leaves in response to mite feeding. The leaves may drop prematurely in summer and if this is followed by rain or irrigation the tree may flower again using buds that would have been reserved for the next season crop.

The use of broad-spectrum insecticides greatly reduces the number and effectiveness of beneficial insects, and mite populations have developed varying degrees of resistance to several miticides. If chemical control is required, careful selection of a miticide is important.

There are several effective miticides available but they may be phytotoxic to some plants. Small black mite-eating ladybird beetles (Stethorus) commonly attack two-spotted mites but tend to appear when mite populations are high and damage is occurring. Several predatory mite species have been introduced as biocontrol agents against spider mites. Two-spotted mite has been successfully controlled in Victorian apple, pear and peach orchards by the use of an integrated approach in which chemicals are used in conjunction with the introduced predatory mite Galendromus occidentalis. Neoseiulus californicus is another predatory mite that is tolerant of Australian climatic conditions in fruit growing areas.