A newly established pest to Australia

Fall armyworm is a highly invasive pest that has recently become established in Australia.

Fall armyworm (FAW), Spodoptera frugiperda, is a highly invasive and destructive caterpillar native to tropical and subtropical regions of the Americas. (Figure 1). Destruction of crops can happen almost overnight when population levels are high.

Since 2016 FAW has spread quickly through Africa, the Indian subcontinent, China and south-east Asia.

In January 2020 it was detected in far north Queensland and has since been found in northern Western Australia and the Northern Territory. In September 2020, it was detected in a FAW surveillance trap near Moree in northern New South Wales. In December 2020 FAW was found at a single location in East Gippsland in Victoria.  It is now considered established in Australia.

Despite multiple attempts, FAW has never been successfully eradicated from any country it has invaded.

Does fall armyworm occur in Victoria?

FAW generally prefers tropical and subtropical climates, which does not match the climate of Victoria’s production regions. It is not yet known if FAW will be able to persist over winter

Given the ability of FAW to travel long distances, there is potential for  incursions into Victoria from the northern states, most likely during warmer months (summer/autumn). It is not yet known if FAW will be able to establish in Victoria.

Eggs are laid on the underside of leaves in masses of 100-300 usually with a protective cover of fine bristles (Figure 2). 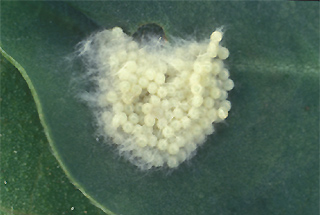 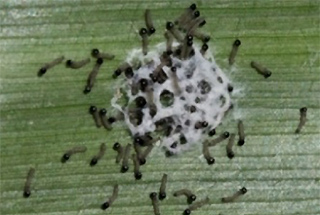 Mature caterpillars are smooth bodied and grow up to 40mm in length. They range in colour from dark yellow to green, brown and black with prominent lighter stripes running the length of the body (Figure 4).

Adults are dull brown and grey in colour with a large furry body and a wingspan of 32–40mm.

The male has two distinct white marks on each of the forewings (Figure 5 and 6).

FAW has a similar appearance to other armyworm species found in Victoria. The caterpillar can be distinguished by the inverted Y shape on the head.

The male adult has distinctive marks on the forewings and both adult sexes have iridescent white hind wings with narrow dark borders. FAW is known to feed on more than 350 plant species, including economically important crops such maize, cotton, rice, sorghum, sugarcane, wheat and many other vegetable and fruit crops.

Mature caterpillars can cause extensive defoliation and damage grazing on leaves stems and trunk and tunneling in to feed on fruit (Figure 7).

Many caterpillars may be present on one plant. If over-crowding occurs they will disperse en masse by 'marching' in search of food (hence the name 'armyworm').

Fall armyworm larvae are most active during late summer and early autumn months.

How does it spread?

Adults are capable of flying long distances and their migration rate is remarkably fast. They can also spread through trade and transport routes and people movement.

What do I do if I find fall armyworm? Get informed. For more information about FAW in Australia please take the time to look at the experience of monitoring and managing FAW from other states and industry perspectives.

FAW development and behaviour in the Victorian climate is not known to date. Issues such as whether FAW will persist through winter in Victoria, or migrate seasonally from warmer northern states, will influence control strategies. Economic thresholds for control are an area of current research.

The use of chemical control is an option where economic damage can be prevented. For information on currently registered and or permitted insecticides to manage FAW, check the Australian Pesticide and Veterinary Medicine Authority (APVMA) website.

Beneficial insects can be prevented from becoming effective at reducing pest populations if broad spectrum insecticides are used in the production system.

To ensure safe and integrated pest management, consult a qualified agronomist for advice on chemical options that may include ‘softer’ options that will reduce harm to beneficials in your production system.