Since 2015, three of the five serious, pest exotic leafminers have made their way to Australia, with one now present in Victoria.

In May 2022, suspect leafminer samples collected west of Melbourne were confirmed as the exotic serpentine leafminer (Liriomyza huidobrensis). It was first detected in Australia in October 2020 in New South Wales. The NSW Department of Primary Industries launched an emergency response to this detection that involved surveillance and tracing to delimit the extent of the infestation. In early 2021, the response transitioned to management once it was determined that it was not technically feasible to eradicate. The pest is now considered established in New South Wales, Queensland and Victoria.

Exotic polyphagous leafmining flies of the genus Liriomyza are pests that pose a serious threat to Australian agricultural and horticultural industries. Australia has a number of Liriomyza species already present in Australia, but they do not impact on horticultural production. Leafminers feed in tunnels under the leaf surface – these tunnels cause visible damage which are referred to as ‘mines’.

There are over 300 species of Liriomyza worldwide, with only five of these considered significant pests that are known to attack a wide variety of plants:

The adult flies of Liriomyza species, including exotic and local species present in Australia look very similar. Reliable identification requires examination under a microscope. They are small (1 to 3mm) grey-black flies with yellow markings (Figures 1 and 2). The larvae of Liriomyza leafminers are yellow to white in colour and feed in the living plant tissue in tunnels beneath the surface of the plant. The larvae are very small and cannot be seen easily – only larval mining tunnels can be seen on the leaves of infested plants (Figures 3 and 4).

Exotic leafminers leave squiggly white lines on impacted host plants (Figures 3–5). Tunnel patterns and sizes vary with different species. Heavy tunnelling damage reduces the ability of the plant to photosynthesise, which can result in leaf death or premature leaf drop. Heavy infestations can leave stippling damage on plants from the feeding and egg-laying sites of the adult females. Mine damage can also reduce crop yield and leave leafy green crops unmarketable due to the tunnelling left behind. 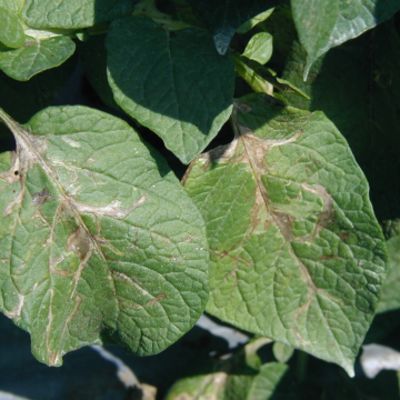 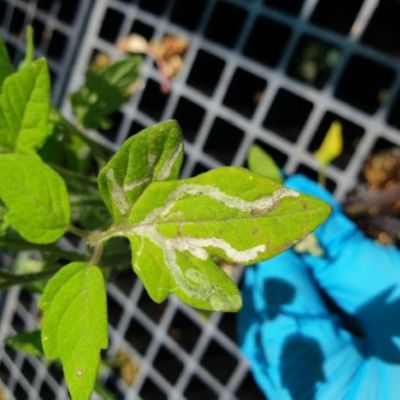 Exotic leafminers have a very wide host ranges, including common weeds in the Asteraceae (sowthistle) and Solanaceae (nightshade) and Fabaceae families.  Common vegetable crop hosts include:

Each of these exotic leafminers have different distributions.

Adult leafminers are typically poor fliers, moving only short distances between crops, but can also travel long distances by hitchhiking via human movements or through wind dispersal.