Wax moth larvae are very destructive and can quickly destroy stored beeswax combs. They tunnel and chew through combs — particularly combs that have contained brood and pollen.

Wax moths are never the initial cause of colony destruction but in weak colonies their larvae can damage combs not covered and protected by bees. 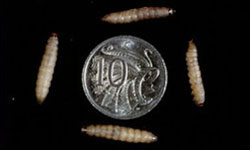 Adult moths are pale brown to grey, usually about 20mm long. The grey wings are often mottled and appear as 'roof' or 'boat' shaped when folded over the body.

Female moths usually lay 300 to 600 eggs in clusters on comb or in small cracks in hive material. The almost spherical, pinkish to white eggs are about 0.5mm in diameter. 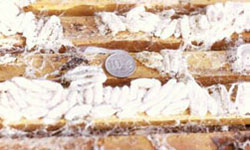 Larvae are creamy white, but turn grey on reaching their fully grown size of up to 28 mm in length. After hatching, the small very active larvae tunnel in comb. They line their tunnels with silky web as they go, moving from comb to comb through a mass of webbing.

Wax moth larvae are very active in warm weather, but become inactive in the extreme cold of winter. At the optimum temperature of about 32°C they reach full development about 19 days after hatching. At cooler temperatures, and when food is scarce, the larval period may extend to 5 months. 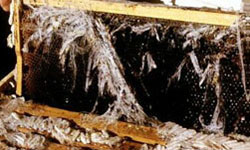 Fully developed larvae spin silky cocoons that may be found in a mass of webbing in the comb, and on the frames and internal surfaces of the hive. Larvae may form small canoe-shaped depressions in the wooden hive components in which to spin their cocoons. Larvae can also bore through the wooden bars of frames.

After spinning the cocoon, the larvae commence the pupal stage which lasts about 14 days when temperatures are high but as long as 2 months during cooler temperatures.

After emergence, adult moths mate and the life-cycle begins again.

This moth is smaller than the greater wax moth and has a silver-grey to dull-yellow, slender body about 13mm in length.

At first, combs left unattended by bees are attacked. As the colony weakens further, even combs with bees may be damaged.

On occasions, 1 or 2 wax moth larvae may be seen in a healthy, populous hive. These are usually removed by adult bees and very little, if any, damage occurs.

Sometimes, one or two wax moth larva occur between the hive mat and the top bar of a frame. Again, these individuals cause little, if any, damage and may be removed by the beekeeper.

Worker bees chew the remainder of the capping thereby fully exposing the heads of the pupae which continue to develop normally. The lines of bald brood follow the direction of the wax moth's travel.

Some honey bee pupae nearing maturity may have deformed legs or wings. One of the causes of this deformity is a result of wax moth excreta affecting the final moult of the pupa before its emergence from the cell.

Newly formed adult bees are sometimes unable to emerge from their cells. These bees are trapped by silken threads produced by greater wax moth larvae tunnelling at the base of the cells. The bees eventually die and are later removed by hive bees. This is a minor problem and is rarely seen.

Damage varies with the level of infestation and the time since the infestation first began. In time, stored combs may be completely destroyed and the frames and combs become filled with a mass of tough, silky web. In ideal conditions for wax moth development, a box (super) of combs may be rendered useless in about a week.

Damage occurs mainly in the warm and hot months of the year when wax moths are most active. However, considerable damage can still occur during the cool part of late autumn and early spring — as greater wax moth can produce a large amount of metabolic heat which can raise the immediate temperature around them by up to 25°C above the normal environment temperature. Little if any damage is seen in the extremely cold winter period, because the larvae are relatively inactive.

At the time of storage, combs that might seem free of wax moth can contain eggs that will hatch later. They should be monitored at frequent intervals for signs of moth infestation unless treated.

Adult moths may also lay eggs in the external cracks and joints of stacked supers of combs. After hatching, the tiny larvae quickly tunnel though the joints to infest the combs. This explains why some combs that have been treated by freezing to kill all life-cycle stages of the moth are later found to be infested.

Wax moth larvae prefer dark brood combs that contain some pollen. However, combs sticky with honey after extracting, white combs and combs containing honey are still at risk of attack.

Larvae may damage frames and hives by chewing the wood to make cavities for cocoons.

Wax moth larvae grow extremely well on a diet of fresh or dried pollen. Adult wax moths may deposit their eggs whenever pollen is exposed while in the pollen trap on the hive, and during processing and packaging. The eggs can hatch at any time, even after packaging, making the pollen unsuitable for human consumption.

Honey sold in the comb should be protected immediately when it is taken from the hive. Wax moth eggs present on the comb at the time of packaging will hatch soon after and the webbing and excreta produced by the larvae will render the comb unfit for sale.

The control measures described below are effective for both the greater and lesser wax moth.

Slum gum, old combs and scraps of beeswax are best collected and processed to form clean cakes of beeswax. If left unprocessed, these items can provide an ideal environment for development of wax moth.

Combs and other items infested with wax moth are best treated or destroyed. A clean environment will always assist in minimising the incidence of wax moth.

Maintain strong, populous colonies and wax moth invasion will be curtailed. Weak colonies may be united with other colonies of bees to form one strong colony.

Some beekeepers who store combs in late autumn and reuse them in early spring find that control methods are not needed because the winter temperatures prevent or minimise any wax moth activity. The success of this method depends on the winter temperature in the district. Careful monitoring of stored combs on a regular basis, even during winter, is essential.

Some beekeepers may temporarily store a super of empty combs above the mat and beneath the cover of the hive occupied by a strong honey bee colony. The bees protect the combs from wax moth.

During good honey producing seasons, combs of honey removed from hives for extracting may be left for a short period of time before they are again used on a hive. Beekeepers find that if this period of rotation is short, there is little opportunity for wax moth infestation to occur.

All life-cycle stages of the wax moth, including eggs, are killed by freezing at the following temperatures and time-lenghs:

It is important to commence timing of this treatment only when the hive material or apiary products have reached the recommended temperature. A number of hobby beekeepers have purchased small freezers and find freezing an excellent means of protecting their combs.

After freezing, the combs should be stored in a moth-proof environment to prevent re-infestation. Sealed, strong plastic garbage bags provide a good insect-proof storage environment.

Combs that have been frozen and then placed in untreated supers for storage are immediately at risk to infestation because the supers may contain wax moth eggs. It is best to treat the super and combs and then place them together in a sealed plastic bag.

The use of cool rooms to store combs and protect them from wax moths has become increasingly popular in the beekeeping industry. A temperature of 4°C will restrict wax moth activity.

Collecting pollen from pollen traps every 2 or 3 days will help to minimise, but not prevent, wax moth infestation.

Drying and packaging of bee-collected pollen should be done in a moth-proof environment and the product frozen to kill all life-cycle stages of the moth. Allow sufficient time for the product to cool to the desired temperature before timing the commencement of the treatment.

Freezing of pollen after packaging will ensure that the product is free of wax moth eggs and will not be at risk of infestation until the package is opened.

This product may also be frozen to control all life-cycle stages of wax moth. However, some types of honey (for example, clover and lucerne) may candy after freezing.

Allow time for the product to cool to the desired temperature before timing the start of the treatment. To some extent, freezing comb honey for 24 to 48 hours can eliminate the guesswork.

Comb honey may also be held in cool rooms but this treatment will not kill wax moth eggs.