Bryobia mites (often referred to as clover mites), Bryobia spp. (Acari: Tetranychidae), are sporadic but significant pests of winter grain crops and pastures in southern Australia. Reports of Bryobia mites in Australia date back to the early 1900s. However, it has only been in the last two decades that these mites have been reported as causing significant damage to a variety of agriculturally important plants. 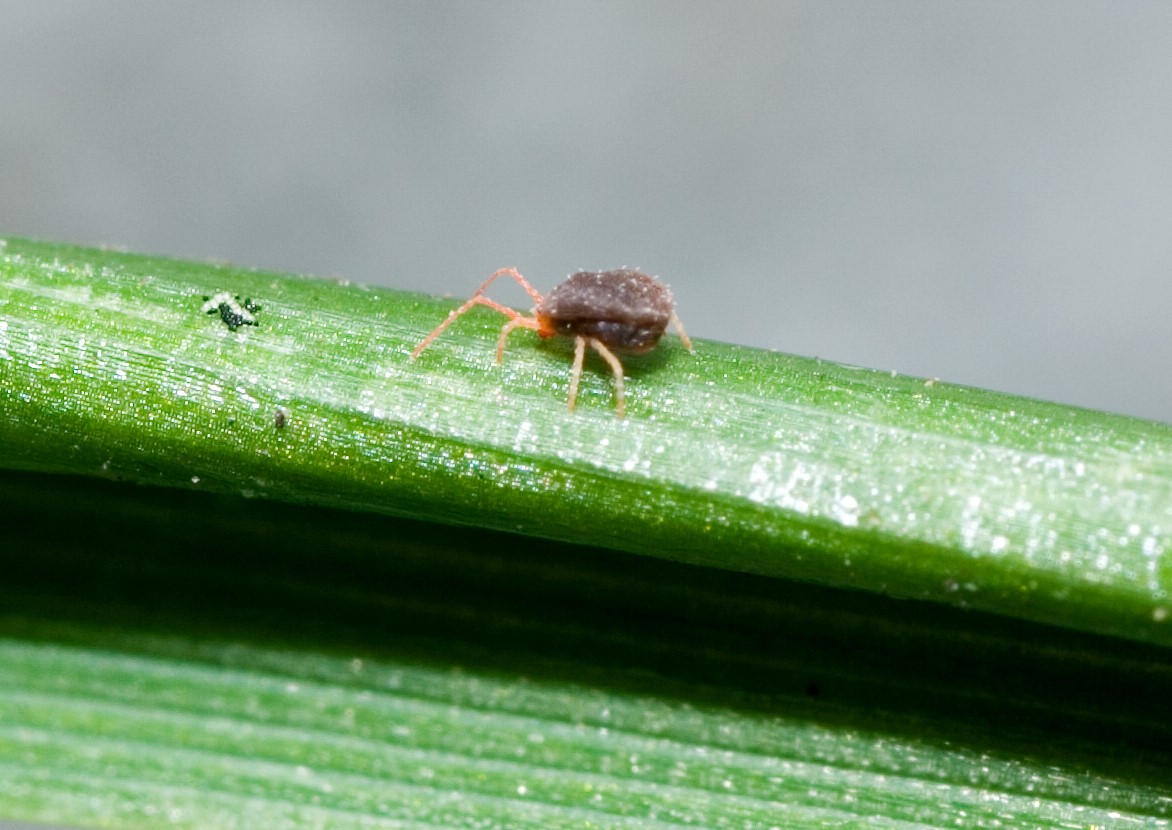 There are over 100 species of Bryobia mite worldwide, with multiple species found in Australian broad-acre crops and pastures. Management of these mites is complicated by the number of cryptic species, as well as their small size and lack of suitable morphological characters which makes identification difficult.

Bryobia mites are smaller than other commonly occurring pest mites (such as redlegged earth mite and blue oat mites), only reaching about 0.75 mm in length as adults. They have an oval-shaped, flattened dorsal body that is dark grey, pale orange or olive in colour and eight pale red-orange legs the front pair of which is elongated (Figure 1). These elongated front legs are approximately 1.5 times their body length and can help distinguish them from other pest mites. If seen under a microscope, they have a sparsely distributed set of broad, spade-like hairs, appearing like white flecks.

Eggs are spherical and red in colour. They measure approximately 0.15–0.25 mm in diameter and are laid either separately or in small groups and generally covered with dust. Newly hatched larvae are very small in size, bright orange-red in colour and have six legs. The larval stage is followed by two nymphal stages in which the mites have eight legs and resemble adults but are smaller.

Males (although rare) are found within a few species and these are quite easily recognised from females by their much smaller body size and extremely long front legs, which are up to two times longer than their body size.

Similar to other pest mites, long dispersal range is thought to occur via the movement of eggs in soil adhering to farm machinery and livestock as well as through the transportation of plant material. Movement is also thought to occur during summer when diapause eggs are transported by summer winds. Bryobia mites are found all year round but are typically most abundant during the warmer months of the year from spring to autumn. In the winter months numbers decline and they are unlikely to cause economically important damage to grain crops and pastures. Their active periods are dependent on the species, with the life-cycle and occurrence of diapause varying considerably between species. Some species have no diapause stage with the succession of generations proceeding continuously throughout the year, while others have one or more generations a year, separated by summer and/or winter diapause.

On average, the life-cycle takes about one month to complete but is dependent on temperature and humidity. The developmental stages of Bryobia mites consist of four active stages (larvae, protonymph, deutonymph and adult) and three resting stages. Although further research is needed, is it assumed that Bryobia mites within Australia are largely asexual, given that the majority of populations consist of only females and only a very limited number of males have been found.

Bryobia mites are most active during the warmer parts of the day and may be difficult to detect during the early morning or in wet conditions. They are often found on the leaf surfaces of plants and tend to feed mainly on the upper leaf surfaces. They can also be found on twigs or debris on the ground. When disturbed they drop from the plants, curl their legs and remain still.

All species of Bryobia mites are phytophagous and they feed on plant material by puncturing plant cells with their mouth-parts and sucking out the contents. This feeding causes distinctive trails of whitish-grey spots on the leaves (Figure 3). Extensive feeding damage can lead to cotyledons shrivelling. On grasses, Bryobia mite feeding can resemble that of redlegged earth mite. They tend to cause most damage in autumn where they attack newly establishing pastures and emerging crops, greatly reducing seedling survival and retarding development.

Bryobia mites attack a variety of agriculturally important plants and are reported to cause considerable damage to pastures, canola, pulses and cereal crops. They appear to have a preference for broadleaf plants such as canola, lupins, vetch, lucerne and clover. In pastures, Bryobia mites prefer medics and clovers over grasses. They occasionally attack wheat and barley as well as some weeds. Susceptible pastures and crops should be carefully monitored during early autumn and spring when Bryobia mites are most problematic. During monitoring look for mites and evidence of feeding damage on newly established crops, as well as clovers and brassica weeds prior to sowing. It is especially important to regularly inspect crops in the first three to five weeks after sowing. Crops most at risk are those sown into paddocks that contain summer and autumn weeds and/or were pasture the previous year. A warm mild autumn will favour mite survival. Bryobia mite numbers generally decline over the cool wet winter months and they tend not to be much of a problem during this period.

Mites are best detected on warm days from midday until late afternoon. Unlike many other species of mites, which spend a lot of time on the soil surface, Bryobia mites are mostly found on the lower and upper leaf surfaces of plants. Bryobia mites are difficult to detect during early mornings or in wet conditions.

An effective way to sample mites is to use a standard petrol powered garden blower/vacuum machine. A fine sieve or stocking is placed over the end of the suction pipe to trap mites vacuumed from plants and the soil surface. Place contents on a black tray to inspect as this allows you to visual the mites easier.

Chemicals are the most commonly used method to manage Bryobia mites, and there are several insecticides registered for Bryobia mite control. These chemicals are only effective against the active stages of mites; they do not kill mite eggs.

Bryobia mites have a natural tolerance to several chemicals and the recommended rates used against other pest mites (e.g. redlegged earth mites) might be ineffective against Bryobia mites.

Differences in tolerance levels between Bryobia species complicates the management of this pest. Organophosphate insecticides typically provide better control against Bryobia mites than synthetic pyrethroids, although recent research has found the efficacy of organophosphates differs depending on the Bryobia species being targeted.

Chemical control is rarely warranted to control Bryobia mites once crops are established, although some pastures can be impacted significantly in spring. For more information about Bryobia mites and insecticide control, visit the Cesar Australia Bryobia mite PestNote.

For information on currently registered and or permitted chemicals, check the Australian Pesticide and Veterinary Medicine Authority (APVMA) website. Always consult the label and Safety Data Sheet before using any chemical product.

There is very little known about biological control agents (predators or parasites) for Bryobia mites in broad-acre crops and pastures in Australia. However, there are a number of predator species known to attack other earth mites such as redlegged earth mites, which are also likely to prey upon Bryobia mites. These include predatory mites, small beetles and spiders.

Cultural controls can be effective in controlling mite numbers. Crops that follow pastures with a high clover content are most at risk. Avoid planting susceptible crops such as canola, lupins, vetch and lucerne into these paddocks. Early control of summer and autumn weeds within and around paddocks, especially broadleaf weeds such as capeweed and clovers, can help prevent mite outbreaks.