The exotic pest commonly known as the electric ant or little fire ant (Wasmannia auropunctata) was detected in Queensland in May 2006 at Smithfield in Cairns. It has since been found in several other areas in Far North Queensland.

Biosecurity Queensland is undertaking an electric ant eradication program — for the latest information, visit the Department of Agriculture and Fisheries website.

Electric ant has not been detected in Victoria.

Alternatively, you can make a report via our online form with a photo (where possible). 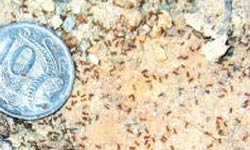 See the Plant Quarantine Manual for a description of these requirements.

For more information, contact one of our plant standards officers:

Where electric ants are found

The electric ant is native to Central and South America, but has established in:

Its impact is similar to red imported fire ants, in that it injects a powerful venom when it stings.

How electric ants can spread

Electric ants spread mostly through human activity with the movement of plants, plant products or edible material. Once the ant has established it is known to spread up to 170m per year, with a more typical rate range of 0 to 25 metres per year depending on the environment.

Photographs supplied by and © The State of Queensland, Department of Primary Industries and Fisheries (2006)