About varroa mite of honey bees

Varroa mite (Varroa destructor and Varroa jacobsoni) is a parasite of adult honey bees and honey bee brood. It weakens and kills honey bee colonies and can also transmit honey bee viruses. Varroa does not occur in Australia. Should it become established in this country, it will be a major problem to commercial and hobby beekeepers.

Adult female varroa are reddish-brown, shaped like a scallop shell, about 1.1 mm long and 1.7 mm wide and visible to the naked eye.

Adult males are smaller and are yellowish-white. Both sexes have eight legs.

The eggs are 0.5 mm long, milky-coloured and at first rounded.

Females of Varroa jacobsoni, another exotic species, are smaller than females of V. destructor, being about 1.0 mm long and 1.5 mm wide.

Varroa only produce offspring when honey bee brood is present in hives. Mated female varroa enter drone and worker brood cells containing mature larvae just before hive bees cap the cells. The female varroa move to the base of the cell and submerge themselves in the larval food. When the cell is capped, the submerged mites move to the larva and begin feeding.

Individual females lay up to 6 eggs, beginning about 60 to 70 hours after the cell was capped and thereafter at intervals of about 30 hours. The first egg laid is male and all the others are female. Eggs are laid on the base and walls of the cell, and sometimes on the developing bee. 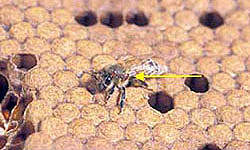 Development of female varroa from egg to adult takes about 8 to 10 days. The long interval between the laying of individual eggs means that mites of different stages of development may be seen in the one cell. Protonymphs hatch from eggs about 12 hours after laying. A larger duetonymph stage occurs before the final adult stage.

The single male varroa mates with its sisters while they are in the brood cell.

When the new adult bee emerges from its cell, the young varroa females and mother mite also leave the cell, often on the emerging bee. The daughter mites feed on adult bees and after a short period enter other brood cells to lay eggs.

The males live for only a short time inside sealed brood cells and are never seen outside the cell.

The mites are very mobile and readily transfer between adult bees. 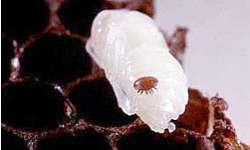 The transport of hives, used beekeeping equipment and queen bees by beekeepers is also a very effective means of spread. In Australia, the spread of varroa is expected to be fast over long distances because of the migratory nature of the beekeeping industry.

Foraging and drifting bees and swarms can also spread varroa. In the case of foragers, mites can move from the bee to a flower and then hitch a ride with another bee or insect visiting the same flower. Varroa is not spread in honey. 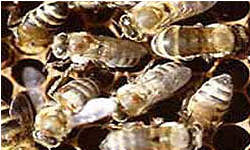 Mite numbers increase slowly within a hive. It may not be until the fourth year of infestation that numbers are sufficiently high for honey bee larvae to be parasitised by several females. When this occurs, newly emerged adult bees with deformed wings, legs and abdomens may be found at the hive entrance.

Patchy brood patterns may also be seen in advanced infestations. Colonies affected to this extent will usually die.

It is important when varroa is suspected in an apiary that the following steps are taken by the beekeeper to reduce the risk of spread:

If you see or suspect varroa is present in your apiary, you must report it immediately by calling the Exotic Plant Pest Hotline: 1800 084 881 (24 hours a day, every day of the year).

Notification is required by the Livestock Disease Control Act (1994). To not notify is to break the law.

Early recognition of varroa is one of the most important factors influencing the chance of controlling them and reducing their economic and social impact on the whole community.